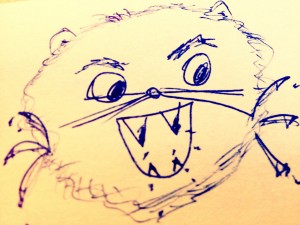 An artist’s rendering of the foul beast

I have a mouse problem. For a week or so, I was awoken by a suspicious scratching noise coming from the baseboard heater things (technical term) at 3:30 a.m. (Then 4:30. Then 5:30). Then, I saw small brown pellets in my bathroom. Hmm, I thought. This is a little unusual.

Things that will not repel a mouse no matter how much you might wish they would
1. Peppermint oil. I faithfully put expensive-ass New Frontiers peppermint oil on some cotton balls and put them near where I heard the scratching. Next day, a tiny perfect poo appeared on one of them.
2. Cleaning a lot. God, they’ll go anywhere and find a home in anything. Cleanliness doesn’t bother them one bit.
3. Prayer.
4. Screaming humans.
5. Strong pyschic vibes wishing for their immediate deaths.

The interwebs to the rescue
After diligent internet research, I called Wal-Mart, Home Depot and HomeCo and asked if they had electric mousetraps, which humanely, quickly and hopefully odorlessly electrocute mice. They didn’t have them, because they suck. Amazon did have them! Somehow I thought cheaping out on the overnight shipping was a good idea (what is $20 in the grand scheme of life?) and waited a few scratching, pellet-y days for it to arrive. La la la, I thought as I prepared for bed the night before I went on a much-anticipated work trip to New Orleans. I’ll set that bitch up after I get back. The thought of hearing/seeing/smelling a mouse being electrocuted at 3 in the morning didn’t appeal. I don’t want to even know they’re there, I thought.

Then
4 a.m. Scritch scratch scratch scritchity scratch. I’m bolt-awake and both deliriously devastated and pissed. After opening up my iPhone to both illuminate my room/scare off the little bastard, I’m feeling pretty good. Pretty good. I’ll just make a pit stop at the restroom, then go on a little walky-poo like the last time the scratching woke me. A transcript of what I texted my sister:

Mouse appeared while I was peeing at 5 a.m. I screamed. I ran to my bedroom and closed the door. It slid under the door and ran toward me.* I screamed. It dived into my closet. I grabbed my purse and a sweater and drove ard [until the sun came up]. Trying to talk myself into going back there. I’m sure there’s a motherfucking mouse nest in my suitcase. I may not come back from NOLA. I may live in my car.

Spoiler: I came back from NOLA and am not (yet) living in my car. My roommate’s cats (yeah, TWO CATS, TWO, TWO FUCKING USELESS CATS) patrolled while I was gone, but they couldn’t seal the deal. A snap trap did. The culprit is dead, Pam texted me while I was in NOLA. And there was much rejoicing.

Sidebar
THEN, THEN, that very same morning I get fucking patted down by the TSA (and they were lovely, they don’t get much credit but they were very professional and this was two days after the LAX shooting) at Sky Harbor. Shit. You think you have problems and then you get pulled aside and have your name run through a nationwide database.

Safe and sound?
The first night I was back from Nawlins, sick with a hellish airplane cold, I slept like a baby for about 15 hours. Maybe it’s gone, it’s over, I thought. But mice are not exactly loners, whispered the voice in the back of my head.

The night after, with a snap trap filled with delicious cereal lurking by my bed, I tried to embrace sweet slumber. But alas, it was not to be. THEY’RE BAAAAAAACK. Scritch scratch scritchity scratch. AUUUUUGH!!!

My brother-in-law, the mouse killer
So I slept at my sister’s for a few nights. My bro-in-law, Ash (he works in a nursery and deal with mice a disturbing amount, poor guy), came over early this week and expertly put down many, many traps. Do you think the damn mice went anywhere near them? Noooo. Then I started sleeping in the basement which is totally mouse-free (ha) or at least has no poo evidence of them.

Calling in the professionals
Not sleeping really screws you up, in case you were wondering. Jerking awake, heart pounding, thinking maybe a mouse is crawling on your bed (oh yes, they crawl on beds according to internet horror stories)–not good for you. Makes you real grumpy. I called in an exterminator today so he can hunt around the house in the cold for how the little bastards are getting in and fix it. And hopefully empty the traps. Pray for me, friends. Pray that one day my dream of being hanta-virus-laden rodent-free will come true.

*A friend who is equally afraid of mice earnestly told me, “It was a drug-addicted, psychotic mouse,” and I’m choosing to believe that.

Getting patted down by the TSA: Actually not that badOn vermin: Part two